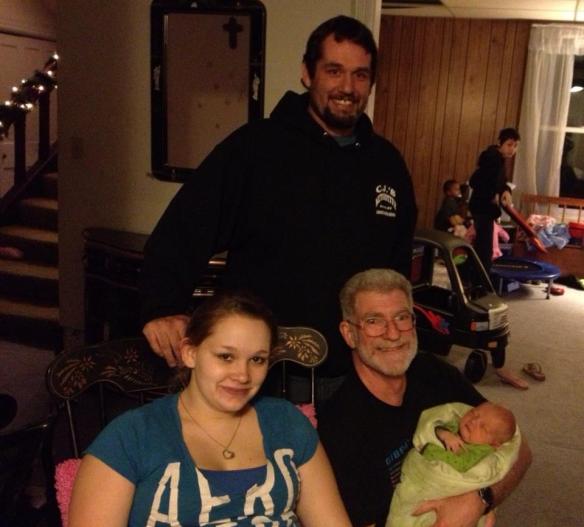 Christmas is family time. We started with friends before Christmas, did Christmas Eve and Christmas morning with just our nuclear six and had my sister and her family for Christmas dinner. Before my sister left this morning, my brother-in-law and sister-in-law arrived. We had an unexpected surprise when not only Jimmy and his family visited this afternoon, but also brought my first great grand baby- Jakob, who will be a week old tomorrow.

I am fighting off a bug and couldn’t hold him. The Dad had no problem taking my turns as well as his.

GB was thrilled to be taken out to lunch by her biological grandparents and her aunt. Hope did lots of sleigh riding at Bella’s. All the kids enjoyed the snow. No excitement and minimal drama makes for a good Christmas at home. The drama? That can wait until I have enjoyed the rest of my holiday.

In 1989, when my two oldest were six and four, we instituted a family tradition. Everyone was welcome to have a wish list and talk about what was on it. There were a maximum of five items per list. If an item wasn’t on your list, you could not mention that item. You were welcome to add it to your list, but since there was a maximum of five items on a list, you would have to cross something out. The first couple of years, our lists had a lot of cross outs on them. Then, as our lists went from being new to being a family tradition, the kids adapted. Lists could be maintained year round and much thought went into deciding if they wanted something badly enough to put it on the list.

In keeping with family tradition, here is my list:

1. I want gun laws, similar to those in Japan. I know I can’t stop people from killing other people, but that would at least slow them down.
2. I want every child to have all the physical and mental care they need as a  right.  Perhaps the right to lifers would help me on this one.

3. I want education at all levels to be given more money and thought than weapons and wars get. Then the powers to be would make sure education was funded and effective.

4. I want the world to slow down. I want relationships to be purposeful and valued.

6. I want I am innately a rule follower, so I will stick with my five most important wishes.

I do realize nobody gets everything they want… but it would be… a really good Christmas.

I know it is not December yet. In our extended family, Christmas has traditionally started the Friday after Thanksgiving. The holiday music comes out, we start decorating, planning projects, and planning menus. Hope had some good moments in the last two weeks, but I have still decided we need to stay home for the holidays. People who what to see us will come here.

Our December trip to the water park will wait until January. Various people will do traditional Christmas activity, such as visit Bedouin Park, with all its lights, ski Hunter Mountain, and going caroling. Everyone participates with the Advent Calendar and family movie nights with the traditional Christmas DVDs will happen. Homemade hot chocolate and various cooking projects will take place. Secrets and wrapping will happen.

Pre-holiday decluttering has commenced and the fireplace is working. Presents here are always low key and family games are traditional. Low key will not only allow Hope to enjoy more, but will reduce the stress level for everyone. Conversations are already happening around here to identify which traditions are most important.

My fourteen day challenge was only partially successful- the atmosphere in the house improved, but I didn’t do as well as I had hoped. A low key December is much more doable and something I am looking forward to.

December 1st is two short days away. In my family, that is the traditional start of the Christmas season. Our Advent calender will be hung. We will start to decorate, make ornaments, and bake. Most importantly, it will be time to focus on other people.


Children learn by seeing and doing. With my first family, we went to down to Myrtle Beach, every year, a full week before Christmas. We spent that week at Helping Hands, stocking shelves, sorting, wrapping, and delivering gifts, filling holiday baskets. The smallest kids could help people carry their stuff to the car and wish them a Merry Christmas. All the kids would help deliver Christmas to those families having the hardest times- everything from church clothes and shoes, to lovingly wrapped gifts that they had wrapped themselves. Bags and bags of groceries. A live Christmas tree and handmade decorations to decorate it. Always a star for the top. My children still remember these days vividly and their first true awareness that not everyone had it as good as us. We weren’t typical and life for them was difficult compared to the children they interacted with every day, but they learned that there were a lot of people that weren’t as fortunate as they were. When everything was done at Helping Hands, usually Christmas Eve afternoon, my extended family would go back to my parents. There we would put up our tree and decorate it, there would be large trays of lasagna in the oven, and we would make the 7 o’clock service at my father’s church. Our family belonged to many different denominations and each year, we would rotate which church we went to for Christmas morning service.


We don’t do Helping Hands anymore. My parents and brothers are all gone. However, Christmas is still Christmas. We want our current family to have traditions and experience Christmas as a season of celebrating the Christ child, building family connections, and service to others. GB could not cope with the chaos of Helping Hands. Helping Hands could not cope with the chaos of Hope. One of our local kids, a ten year old boy who is autistic, has a yearly project of collecting donations and distributing Christmas bags to struggling families. This year I am picking up 50 gifts and on Saturday, the girls and I will spend the afternoon wrapping them. While we are wrapping them, we will talk about why we help people who are struggling have a little brightness in their season. MK will share her memories of Christmas’ working at Helping Hands.


Family traditions change. You keep the values that are important.