Politicians insisting on protecting unborn fetuses, while refusing to commit to caring for these children after they have taken their first breath.

Having several adopted children with RAD or the adult version of Borderline Personality Disorder, yet not having community support or even a consensus of what treatment will help.

My youngest is still struggling every single day. I did not take her from her mother. I did not cause the damage that torments her. I try to make a difference and then hear RAD is just an excuse to abuse children.

I have no answers. Do you?

Hope’s fever broke this morning. She spent most of the day sleeping, but did curl up with MK and Malachi to watch TV a couple of times. During one of these times, I looked up and saw Hope standing there. She wasn’t saying anything or trying to make eye contact. I observed aloud that it looked to me like something was bothering her. I waited. Hope looked at me briefly and said that Mali had hit her and MK did nothing about it. I asked if a hug might help and she climbed on my lap. We cuddled for a couple of minutes in silence. Then she was done and went back to the TV. I think, for a brief moment, we both felt better. 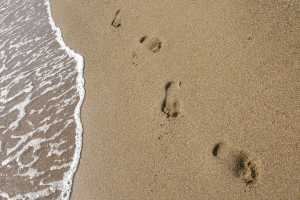 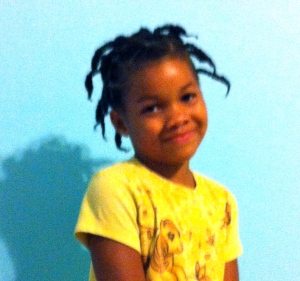 With all of Hope’s difficulties at home and school, I was totally caught by surprise this weekend. A black friend who provided respite this weekend took one look at Hope’s hair and said,”She can’t go out in public like that!”. I was speechless. Joe has a nasty bite on his hand, I have 2 emails and a phone call from the school just in the first four days and I should care about her hair?

Hope had her hair braided today. She looks cute. She has never left braids in for more than 3 days and she won’t let me touch her hair.

I am sure it is cultural. I will make it a point to ask other friends who are black. With Hope’s current problems, I didn’t think hair was on the radar screen.

Last night, The Dad and I went to a parent support night for Hope’s waiver program. Out of the 45,000 children who live in our county, are between 5 – 17, and therefore eligible for the program, there are 12 children receiving services at any one time. One of those twelve children is Hope. In Hope’s class of 6 children, one of the other girls is also in the program Hope is in. So out of the 12 children deemed most in jeopardy of placement in our county, not only are two in the same small school district, the same elementary school, and the same age, but are also in the same class. Poor Ms. Very Young Teacher.


Last night’s session was centered around attachment disorders and RAD. I didn’t really want to go, frankly because after this week, I was not in the mood to discuss Hope at all. Especially when I heard they had lined up a play therapist to speak. There was a tornado warning, I didn’t want to think about Hope, and I wasn’t feeling positive about any of it. I went anyway.


I found a corner to sit in. When the speakers walked in, Joe was instantly excited. I forced myself to get off FB and looked to see what he was excited about. The speaker wasn’t just any play therapist. It was someone I used to know quite well. During the 3 1/2 years she was seeing GB 3 X a week for play therapy, she was also trying to adopt from Guatemala. Just as GB graduated from Brookside to go off to kindergarten, Jose came home. The night turned into an unexpected, enjoyable reunion.


She had left Brookside the same time as GB to work the more flexible hours of private practice and spend time with her new child. Jose is six now. She was so excited to hear how secure GB’s attachment to us was and that GB was doing a great job (mostly) keeping those feeling verbal. Jose is now in school, and she is back working full time, only half the distance away that the last therapist was. I do not know where I am going with this, but possibilities are swirling around my head right now.

EFT is the acronym for Emotional Freedom Technique, commonly refereed to as Tapping. It is based on the Chinese acupressure points. It is possible to lead the child in tapping, with you tapping each point on your self and saying the script out loud and the child following your lead and repeating the script. If your child can’t or won’t do that, you can tap on them directly, speaking the script as you go. There are many scripts you can find online, with videos to follow. If you stick with it, your child will memorize scripts and be able to use them at the appropriate times.

The illustration above shows the acupressure points used. I always start with the forehead, work my way downwards, then end with the crown of the head.

This link to Lisa’s Life in the Grateful House where I started. She has such a good post as to why you should tap, that I will let you read it there. I am using tapping on myself, particularly after Hope has used up my last ounce of energy. I use it with GB to reinforce the self-talk she already has been taught as a technique to use when she is overwhelmed. For Hope, I am using a script Lisa and her daughter made up just for Hope. There are also  RAD scripts on Lisa’s blog to get you started.

It has only been a couple of weeks that we have been tapping, but both girls request it. GB has actually requested that I tap with her when she has recognized she is getting dysregulated.


Tapping isn’t a cure for our kids, but it is another tool to use on our journey of parenting special needs children.

Mother’s Day, as it exists now, in this country, is a commercial success for Hallmark. It wasn’t always that way. During the 1600’s, the early Christians in England celebrated a day to honor Mary, the mother of Christ. By a religious order the holiday was later expanded in its scope to include all mothers, and named as the Mothering Sunday. Celebrated on the 4th Sunday of Lent (the 40 day period leading up to Easter), “Mothering Day” was celebrated honoring all mothers of England. Since many of  England’s poor worked as servants for the wealthy,  jobs were located far from their homes and the servants would live at the houses of their employers. On Mothering Sunday, the servants would have the day off and were encouraged to return home and spend the day with their mothers.


In 1914, President Woodrow adopted a resolution that the second Sunday in May was to be set aside to honor mother’s. It took less then nine years for Americans to commercialize Mother’s Day. 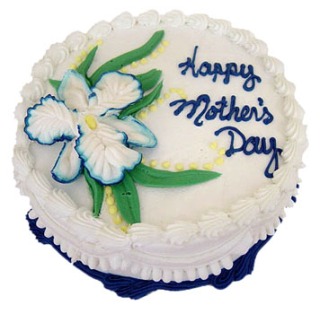 In our family, Mother’s Day always involves a mix of emotions. The little ones plan and plot surprises. I still struggle with the loss of my mom, even though four years have gone by. The Dad’s Mom has Alzheimer’s and doesn’t remember anything. GB has been angry at her Birth Mother for several years now and does not, even in her own mind, consider BM as Mom. Hope gets angry, I think, because in her mind, she doesn’t have a mom. MK is proud to be a mom, but has never resolved her feelings about her birth mother, prenatal alcohol damage, and being given up. I am her Mom, but in her mind, the worst mom in the world. J always finds Mother’s Day a source of guilt- for expectations he had for himself and didn’t meet.


With all these emotions swirling around, Mother’s Day is tiring, sometime exhausting. I try to take several minutes to myself to be grateful for the mother I had for 50 years, for the birth mothers of my children who chose life when they didn’t have to, for the children God gave me to love and end with a prayer that my children will find peace with who they are. Then I join in whatever celebration my children decide they want this year. And maybe, we get a little closer to acceptance.

Everybody came home and Hope immediately lost everything we had gained. Both girls saw the psychiatrist this morning. She was thrilled with how GB is doing and unsurprised at Hope’s current functioning. She also said that intensive case management was the first step to RTC and we had to start making a paper trail. Such discouraging news. I am hoping the intensive case management will help, if only by getting The Dad and I on the same page.


Both girls have CSE meetings this afternoon. Have to finish my prep.